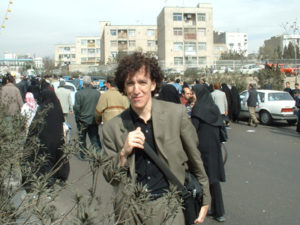 Short biography: Jonathan Curiel is an award-winning writer and journalist in San Francisco.

Long biography: Jonathan Curiel is an award-winning author and journalist who has written widely about Islam, the Middle East, foreign affairs, visual art, film, music, and many other subjects. Curiel has reported stories from around the world, including the Middle East (Iran, Syria, Lebanon, Jordan, and Egypt), North Africa (Morocco and Algeria), West Africa (Mali), Pakistan, Japan, Mexico, and throughout the United States. He has interviewed and profiled some of the world’s leading figures in the arts and global affairs, and has also written widely about social issues, race, religion, and politics. In the months after 9/11, Curiel reported for the San Francisco Chronicle from Syria, Lebanon, and Jordan – doing exclusive interviews with Middle East figures, and reporting on Hezbollah, Palestinian refugees, the Syrian government’s war on dissident groups, Beirut’s rebuilding, media coverage of the Middle East, and other subjects.

Curiel is the author of Al’ America: Travels Through America’s Arab and Islamic Roots. The book, published by The New Press in November of 2008 (and republished in paperback in November of 2009), details the historic influence of Arab and Muslim culture on America, from the time of Columbus to the modern age. Among the areas covered: Islamic architecture and its melding into San Antonio’s historic Alamo building and New York’s World Trade Center; Arab music and its impact on The Doors, Bob Dylan, and the Jefferson Airplane; Persian poetry and its sway over Ralph Waldo Emerson; Americans’ love for Arabic tattoos and Persian carpets; New Orleans’ French Quarter and its link to Islamic aesthetics; and Elvis Presley’s and P.T. Barnum’s connections to Arab and Muslim culture. The book, which is based on exclusive interviews, original research, and new interpretations of historic events, received a 2008 American Book Award from the Before Columbus Foundation (see also here and here), was named one of 2008’s Top 10 books by London journalist Joel Schalit, and was chosen as an “Outstanding Academic Title of 2009” by Choice magazine, the review journal of the Association of College and Research Libraries. More than 700 libraries around the world have the book, including the British Library; Canada’s national library; the National Library of Australia; the National Library of China in Beijing; Germany’s Universitatsbibliothek Erlangen-Nurnberg and Goethe University in Frankfurt; and libraries at Harvard, Yale, Georgetown, MIT, the U.S. Army War College, the U.S. Naval Academy, the U.S. Air Force, the U.S. Embassy in Mexico City, the University of Toronto, Cambridge University, the University of London’s School of Oriental and African Studies, the American University in Cairo, and Turkey’s Middle East Technical University in Ankara. Al’ America was translated into Arabic by Arab Scientific Publishers, the Beirut publishing house that has also brought out Michelle Obama’s biography, The Da Vinci Code, and other titles. (Click here for more about Al’ America – including images, and excerpts of reviews by the Washington Post, which called it “a pleasurable read”; Choice magazine, which described it as “essential [reading]”; and Publishers Weekly, which said “Curiel’s cultural odyssey moves swiftly and engagingly across time and geography.” Click here to watch a two-minute animated YouTube video that summarizes some of the book’s key points.)

From October of 2005 to April of 2006, Curiel was a Reuters Foundation Fellow at Oxford University in England, where he researched and wrote a 10,000-word paper on the historic impact of Islamic architecture on synagogue and church architecture. The paper featured research and reporting from England and southern France. Germany’s Gerda Henkel Foundation, which funds historical humanities, supported the history-oriented fellowship – and also funded Curiel’s research for Al’ America. (See also here, here, and here.) The fellowship is now part of Oxford’s Reuters Institute for the Study of Journalism. During the 1993-1994 academic year, Curiel lived in Lahore, Pakistan, where he taught journalism as a Fulbright Scholar at the University of the Punjab – chosen for the position by the Council for International Exchange of Scholars.

In 2005, Curiel’s work for the San Francisco Chronicle was honored by Columbia University’s Graduate School of Journalism. Curiel, a staff writer at the Chronicle from April of 1985 to August of 2009, was one of a select number of American journalists – including CBS’s Ed Bradley – cited by Columbia University for doing outstanding articles or programs on race and ethnicity. Curiel has written freelance stories for the New York Times, Wall Street Journal, Christian Science Monitor, Columbia Journalism Review, American Journalism Review, Editor & Publisher, Salon, GlobalPost (the foreign affairs site), Trouw (a prominent Netherlands newspaper based in Amsterdam, which translated his opinion piece into Dutch), Ode magazine, The Advocate (the LGBTQ magazine), Tablet (the online magazine devoted to Jewish Life and culture), AramcoWorld (the bimonthly magazine that spotlights the Arab and Muslim world and its connection with the West), Los Angeles Times, Detroit Free Press, Celebrated Living (the American Airlines magazine), and The Wire (a London music magazine). He has also done freelance work for Sight & Sound, TV Guide, Maclean’s magazine (Canada’s equivalent of Time and Newsweek), and True/Slant, where he was a blogger from March of 2009 to July of 2010. Curiel’s articles have been reprinted in such publications as The Globe and Mail (Canada’s national daily newspaper), Chicago Sun-Times, Chicago Tribune, Atlanta Journal-Constitution, Orange County Register, Seattle Post-Intelligencer, Hartford Courant, New York Post and New York Daily News.

In the Fall 2009 semester, Curiel was a lecturer at the UCLA Herb Alpert School of Music in Los Angeles, where he taught writing, interviewing, and other journalism practices to undergraduate and graduate students. In February of 2010, he was an O’Donnell Visiting Educator at Whitman College in Walla Walla, Washington, where he gave lectures related to his book Al’ America. In May of 2010, he became art critic for SF Weekly (see also here). Also in 2010, Curiel was named a writing consultant for the United Nations Development Programme in New York, an arts blogger for KQED (the main San Francisco affiliate of PBS and NPR), and a journalism juror for World Hunger Year’s annual Harry Chapin Media Awards. In 2013, Curiel was a fellow with the USC Annenberg / Getty Arts Journalism Program, which brought leading arts journalists to Los Angeles for a 10-day fellowship program. In 2013 and 2014, Curiel was named a finalist for a Creative Capital | Andy Warhol Foundation Arts Writers Grant. And in 2014, for his art reviews in SF Weekly, Curiel won second place in the “Opinion/Criticism” category of the Freelance Journalism Awards, sponsored by the Pacific Media Workers Guild.

In 2015, London-based I.B. Tauris (now I.B. Tauris/Bloomsbury) published Curiel’s book, Islam in America, which uses interviews, reportage, and journalistic analysis to detail the long history and current status of the religion in the United States. The Oxford Journal of Islamic Studies, published by Oxford University’s Centre for Islamic Studies, called Islam in America “an engaging overview (that) is well written” and “a valuable addition to the available literature on Islam and Muslims in America. . . . The contributions here include an emphasis on early white American converts to Islam and good introductory segments on the Nation of Islam, the Moorish Science Temple, and American Muslim feminists. Curiel also puts race front and centre in many instances, giving valuable references and insights about access to citizenship and relations among Muslims of different backgrounds.” In an interview with Minnesota Public Radio, Jaylani Hussein, executive director of the Minnesota branch of the Council on American-Islamic Relations, said Islam in America was one of five books that people should read to know more about Islam. (The other books were The Story of the Qur’an: Its History and Place in Muslim Life, by Ingrid Mattson; Islam: A Short History, by Karen Armstrong; What Everyone Needs to Know About Islam, by John L. Esposito; and In the Footsteps of the Prophet: Lessons from the Life of Muhammad, by Tariq Ramadan.) Islam in America is in more than 300 libraries around the world, including the libraries of Georgetown University, the National Library of Scotland, University of Cambridge, Trinity College (Dublin), University of Zurich, Bibliothèque nationale de France, King Abdul-Aziz Al Saoud Foundation for Islamic Studies and Human Sciences in Casablanca, the National Library of Israel, NYU Abu Dhabi, and American University of Nigeria.

For more than a decade, Curiel has moderated panel discussions and done on-stage interviews about global affairs at the Commonwealth Club of California, which is the United States’ oldest and largest public affairs forum. Among his recent interviews at the Commonwealth Club: An interview with Northwestern University professor Wendy Pearlman about her book We Crossed a Bridge and It Trembled: Voices From Syria; and an interview with writer Michael David Lukas about his novel. The Last Watchman of Old Cairo. (Click here to see  Commonwealth Club appearances on C-SPAN, and click here to listen to podcasts on the Commonwealth Club website.) In the fall of 2018, Curiel helped produce Michael Krasny’s “Forum” interview show on National Public Radio station KQED. Curiel has been interviewed by National Public Radio affiliates, by the BBC/PRI radio show “The World” (click here to listen), and by BBC radio from London about the life and death of Ravi Shankar. In Tangier, Morocco, he gave a keynote address at Performing Tangier 2008: Borders, Beats and Beyond, an academic conference organized by the Tangier-based International Centre for Performance Studies. A graduate of the University of California at Berkeley, Curiel has also been an invited speaker at the World Affairs Council; Columbia University; Stanford University; Berkeley’s Graduate Theological Union; the University of California at Berkeley’s Center for Middle Eastern Studies; the University of California at Berkeley’s Department of South and Southeast Asian Studies; Lawrence Livermore National Laboratory; Town Hall Seattle; the Humanities Institute at the University of South Florida; the Jackson, Mississippi conference, “Islamic West Africa’s Legacy of Literacy and Music to America and the World” (sponsored by the National Endowment for the Humanities, hosted by Tougaloo College and the International Museum of Muslim Cultures); the Muslim Educational Centre of Oxford (England); and the Foundation Royaumont outside of Paris. He also spoke at Allameh Tabatabai University in Tehran – a talk given during a 1993 visit to Iran.

For Harlan Jacobson’s Talk Cinema, Curiel spoke at San Francisco-area screenings about such films as The Kite Runner, The Triplets of Belleville, and the Oscar-winning The Lives of Others and An Inconvenient Truth. For the San Francisco International Film Festival, which is the oldest film festival in the Americas, Curiel was a juror for the $10,000 Skyy Prize competition during the festival’s 50th year. (In a 2017 analysis of film critic reviews, which included Curiel’s reviews for the San Francisco Chronicle, Gizmodo UK listed Curiel at No. 54 on its list of the world’s most contrarian film critics. The list featured almost 400 film critics, including The New Yorker‘s Richard Brody at #13, Roger Ebert at #61, Time‘s Richard Schickel at #75, and The Village Voice‘s J. Hoberman at #95.)

In 2019 and 2020, Curiel wrote five plays. His 10-minute plays are The 7 P.M. Bus Ride; 1 Corner, 4 Strangers – Let the “Diss Course” Begin; and The Second Date: Lies, Lust, and Longing for Relief from “the Hell That Is Tinder.” Curiel’s two full-length plays are The Wailing In-Laws: Amal and Abraham Plan Their Muslim-Jewish Wedding Day, and The A** List: Art and Assassination in the Age of Donald Trump. In reviewing The A** List for its 2019 playwright competition, the Austin Film Festival said: “This drama is a piercing examination of how powerlessness to overcome one’s circumstances can lead to dangerous and destructive behavior. Politics of our time, brutish social media exchanges and exposed sexual violence make up the perfect toxic environment for the setting of this story. . . . The playwright’s use of irony at the end of the play is provocative.”