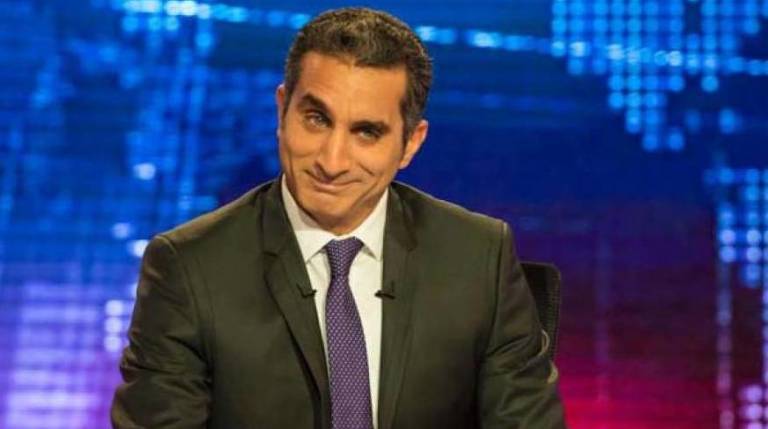 When he appears on Tuesday, Apr. 4 at the University of California Berkeley’s Zellerbach Hall, Bassem Youssef promises to be his usual funny self: a guy who, with a wry quip or odd facial expression, can induce laughter about very hard truths.

Millions of Americans know Youssef as “the Jon Stewart of Egypt,” a designation that references Youssef’s former Arabic-language TV show Al-Bernameg (البرنامج‎‎), in which the comedian satirized Egyptian society before a weekly audience of 30 million people. During the 2011 Arab Spring revolutions and the turmoil surrounding Mohamed Morsi‘s presidential election and deposition in Egypt, humor made Youssef famous.

It also led to Youssef’s arrest by the Egyptian government and eventual forced exile from his homeland.

Today, Youssef lives in the United States, and he’s experiencing a very American moment — at the center of a giant media spotlight. The comedian’s new memoir, Revolution for Dummies, is getting lots of attention, including from Stephen Colbert. Youssef is also the subject of the new documentary Tickling Giants that’s getting rave reviews (“an ebullient ode to freedom,” said Variety) and drawing crowds around the U.S.

By phone from Los Angeles, where he lives with his wife and young daughter, Youssef spoke to KQED about the ups and downs of life in the spotlight, in advance of his appearance in the Bay Area under the auspices of Cal Performances.

Do you miss Egypt and your show Al-Bernameg?

Of course I do. But I’m in a different life now. I’m starting over in a new country with new audiences and new references. I have very realistic expectations. If I have moderate success here – for example having my own foothold in the American media – that will be enough for me. The show in Egypt had its time, and that was it.

In the fall of 2016, you were a visiting scholar at Stanford – with the Program on Arab Reform and Democracy at the university’s Center on Democracy, Development, and the Rule of Law. Is teaching at a university so different from doing comedy?

Well, in 2015 I was an academic at Harvard, and engaging with students is something beautiful, because you have all these young students who are hungry to know more about politics outside the realm of the books they read. And, of course they sometimes turn to you for answers that the biggest, most veteran political scientists and leaders don’t have the answer for, like, “When are things going to change?” and “Do you think there’s hope?” Of course, we struggle in that. But it’s a great experience. I learned from them as much as they learned from me.

You’re very funny in front of a camera. But you can also be serious. Who is the real Bassem Youssef?

I enjoy more intellectual conversations than just cracking jokes. I’m a much more serious person in real life. Maybe before the show, I was that kind of guy – someone who liked to crack jokes. But after the show happened, it was kind of like my persona was doing the show, and my person was exhausted by that persona. In real life, I’m much more mellow.

Revolution for Dummies reminds readers that you got involved in the Arab Spring protests, and started doing your show, somewhat reluctantly. You were a practicing doctor before all this.

I was only one example of millions of people who, after 30 years of living under a dictator, just thought it doesn’t matter to get involved because nothing will ever change. The revolution came and signified the change, and many people who had left Egypt came back. It changed all of us – I can’t say if it was for better or for worse.

When Jon Stewart visited your show in Egypt, you joked with your audience – in Arabic – that Stewart was “the Bassem Youssef of America.” Do you get tired of being compared to Jon Stewart?

We have this joke going on a lot between Jon and me. I’m honored to be mentioned in the same sentence as Jon Stewart. He’s an idol. I’ve watched him for 10 years. For me, it doesn’t get old. But it serves a practical purpose: It tells people who I am in four words: ‘Jon Stewart of Egypt.’ So people can automatically make a reference instead of trying to explain it to them the history of what I did, and what happened in Egypt.

Bassem Youssef appears on Tuesday, Apr. 4 at the Cal Performances event, “The Joke is Mightier than the Sword.”