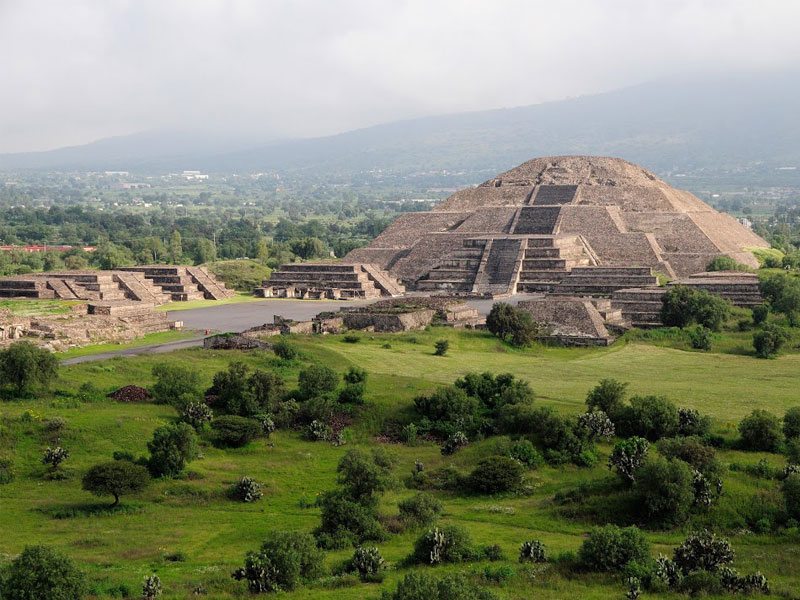 Located on the outskirts of Mexico’s capital, the ancient pyramid city called Teotihuacan is firmly established in the psyches of the Mexican people — and of the millions of tourists who’ve set foot on the stones and pathways that comprise Teotihuacan’s panoramic vistas. UNESCO calls it a “holy city,” and, like other places in that category — including Jerusalem, Mecca, and Rome — it’s been a scene of unrivaled triumphs, peaceful coexistence, woeful neglect, and unspeakable violence.

The site’s two main pyramids, built some 2,000 years ago, climb upward into the Mexican sky, toward the celestial bodies that Teotihuacan’s people viewed as gods who could determine their fate. By themselves, the pyramids are eye-opening marvels of form and architecture that compare to Egypt’s Pharaonic Pyramids at Giza. The biggest Giza pyramid is about twice as tall, and twice as old, as Teotihuacan’s pyramids. But like their counterparts across Egypt’s dusty plains, Teotihuacan’s ancient structures have always contained hidden artifacts — maybe not in the realm of King Tutankhamun’s mask, whose golden, jeweled face has thrilled art-goers for almost a century, but close to it.

In fact, for art scholars who specialize in Teotihuacan, the recent finds that have emerged from excavations of the ancient Mexican city are nothing short of history-making, because the masks, statues, and other objects have revealed secrets that had been hidden for almost two millennia. At its height, Teotihuacan was the largest urban agglomeration in the Americas — a cosmopolitan city of more than 100,000 people that was multicultural, multilingual, and economically advanced. The city’s very layout — with its open streets and lack of a citadel or other major wartime fortifications — suggests that the rulers fully controlled the entire Valley of Mexico, which gave them domain over a large swath of Mesoamerica, centuries before the better-known Aztecs, whose culture they would strongly influence.

A new exhibit at the de Young Museum, “Teotihuacan: City of Water, City of Fire,” which opens Sept. 30, puts 200 objects on display, along with photographs, maps, and other renderings that transport the spirit and culture of Teotihuacan to the museum’s large lower-level gallery. It’s the same gallery that just had “The Summer of Love Experience,” and if there’s any overlap between the two exhibits, it’s this: Teotihuacan embodied an epoch where people from different ethnic and cultural backgrounds formed a community that held together not despite their differences but because of them.

Each ethnic group had a role to play in Teotihuacan’s survival, and its leaders reframed the city’s philosophies to be inclusive. For example, the Old Fire God, a pre-Teotihuacan deity with different interpretations, became amalgamated into a new, purposeful figure. “Teotihuacan: City of Water, City of Fire” features several Old Fire God sculptures, which were likely used for ceremonial purposes throughout the settlement. Fire was an important element at Teotihuacan, though a massive conflagration — it’s still unclear whether it was deliberate or accidental — ultimately led to its demise in the sixth century, C.E. Despite its decline, the Aztecs looked to Teotihuacan for inspiration on how to rule, and UNESCO celebrates Teotihuacan for its “harmonic” architectural layout and “unique artistic achievement.” Many objects at the de Young are being displayed for the first time ever or the first time in the United States, and their striking appearance speaks partly to the geographical position and importance of Teotihuacan, which is situated between mountains.

“If you look at the topography of this part of the valley as it relates to other parts of Mexico, this is the easiest route to get out and down to the Gulf Coast,” Matthew H. Robb, the de Young’s former curator of the art of the Americas, who organized the exhibit, said as he stood atop the Pyramid of the Moon on a recent Wednesday. “Teotihuacan was well-positioned to coordinate and control some of trade from the Gulf Coast coming into the Valley of Mexico.”

That Wednesday, Robb led a contingent of media and de Young staff on a tour of Teotihuacan’s grounds, which upward of 4 million people visit every year. Teotihuacan is an especially important pilgrimage site for those who trace their ancestry to the peoples who founded it. School kids across Mexico City visit the site as a kind of history lesson — to see first-hand the pyramids and structures that are such an integral part of Mexico’s narrative. Images from Teotihuacan, notably the Pyramid of the Sun, have adorned Mexican currency for generations in the same way that the White House and other civic structures appear on the backs of U.S. denominations.

During the 1968 Summer Olympics, held in Mexico City, the Mexican government made sure that the Olympic torch passed through Teotihuacan, where — amid a wave of celebrants, colored lights, and movie cameras — a runner held the flames aloft as he crested the Moon Pyramid at nighttime and lit a fire at the top.

Pomp and pageantry aside, what the spotlights usually gloss over are the continuing excavations at Teotihuacan. Only about 8 percent of the ancient city has been excavated and researched. Archeologists and diggers regularly discover new spaces, and Robb took a contingent wearing hardhats through a recently found tunnel that goes right under the Feathered Serpent Pyramid. The tunnel walls were lined with pyrite — the mineral the Teotihuacan people used for blades and weapons. The tunnel has also revealed beautiful pendants, vases, and masks that were offerings to the gods, gifts they believed would allow the cycles of earthly existence, like the sun’s daily rise, to continue.

“I talk about them as ‘psychic infrastructure,’ that you need to have these things in order for the city to function,” says Robb, who is now the chief curator of UCLA’s Fowler Museum. “We’re not talking about raw blocks of jade. We’re talking about finished objects.”

And the objects — because their stones or jewels originated from neighboring parts of Mesoamerica — showed Teotihuacan’s early economic reach and pull. “

The shells are referencing the Maya world and referencing Oaxaca [south of Teotihuacan],” Robb says, “so already when this tunnel was established, Teotihuacan was on some level in contact with those places, and it’s important to have those visual references as part of the exhibit. The objects are spectacularly well done. They are not Teotihuacan imitations of Maya style.”

Teotihuacan was founded in the first century BCE. As it expanded, and after the pyramids were built, rulers oversaw human sacrifices to the gods. Many of the dead were captured soldiers who were killed in brutal rituals of beheadings and dismemberment. Archeologists continue to find human skulls and bones in the ground that encircles the city.

Standing atop the pyramids, visitors can see a horizon of small green hilltops that are covered with trees and grass. These hills are likely a series of smaller pyramids or other Teotihuacan structures that have been overgrown with the natural environment. At its zenith in the fourth century, Teotihuacan was almost eight miles square — a city-state with 2,000 apartment compounds that was about one-sixth the size of San Francisco. The site that tourists see today is just a small portion of Teotihuacan’s expanse, but it’s still a breathtaking sight (and site), and a reminder of how much more there is to excavate. Mexican only began seriously uncovering and reconstructing Teotihuacan in the early 1960s.

“All of these structures were essentially covered in dirt and plants,” Robb says, standing atop the Pyramid of the Moon. “That mound over there is another structure that hasn’t been excavated yet, so there’s still an enormous amount of urban infrastructure of the site that we don’t know.”

Robb, a fluent Spanish speaker, is one of the world’s foremost experts on Teotihuacan’s art. And the de Young is an ideal exhibition spot because of its long history of collaboration with Mexico’s National Institute of Anthropology and History, signing an agreement in 1981 that brokered the return of Teotihuacan murals that a U.S. donor had given the de Young. (The murals had been looted in the 1960s.) Robb calls the agreement, which guaranteed the murals’ conservation, a “landmark instance of patrimony practice for U.S. museums. Most repatriations are not necessarily happening due to cooperation but legal actions.”

Because of the ongoing cooperation, the National Institute of Anthropology and History worked closely with the de Young on “Teotihuacan: City of Water, City of Fire,” which will be shown at the Los Angeles County of Museum of Art after its San Francisco run. “Teotihuacan” is an Aztec (or Nahuatl) name that has been translated as “The place where the Gods were created” or “Place of those who have the road of the Gods” or “Place where men become Gods.” The Gods on display at the de Young will stare back at visitors from behind glass, but they were originally out in the open — astride pyramids, in people’s homes, on dirt roads, and in tunnels. The people who made these objects and worshipped them didn’t think these Gods lived in the “ancient world.” Their surroundings were new to them. And for all the Teotihuacans knew, their Gods would help them — and Teotihuacan — live forever.